The much hyped Product of Facebook ‘Lead Ads’ has now announced the introduction of Engagement based audience.

This means that Advertisers can now create Audience based on how users reacted to their Ad.

[Just a Quick info for readers who don’t know what Lead Ad is – Lead Ad runs like a normal Advertisement on Facebook, but when someone clicks on it, instead of sending the user to a Landing Page, it comes up with an automated information which is pre filled with users Name and Email Id and any other information that Advertiser wants.

This information is what user has already submitted on Facebook.
Like the email id through which the user logs in and many other such information can be asked]

So now Advertisers can create Audience based on three categories:

Now those who have already submitted would already be in your Funnel.

But those who opened but did not submit are the ones who were interested in your Offering but for some reason they did not submit.

Now having an Audience of such people can be very much beneficial.

This is almost similar to the audience who visited your Landing Page but were not converted into a Goal.

So now with Facebook Lead Ads Engagement you can show that particular audience an Ad or a sequence of Ads.

1.) First you go to your Audience tab and click on Create Audience.
Under it, click on Custom Audience 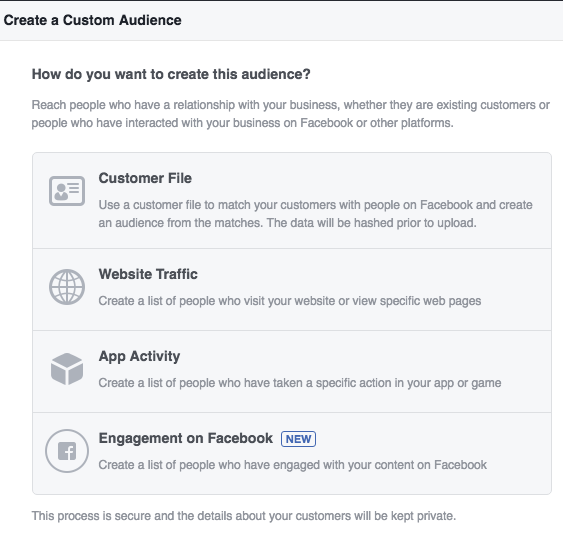 3.) Now Facebook will ask what kind of Engagement you are looking for?

Video or Lead Ad.
You will click on Lead Ad. 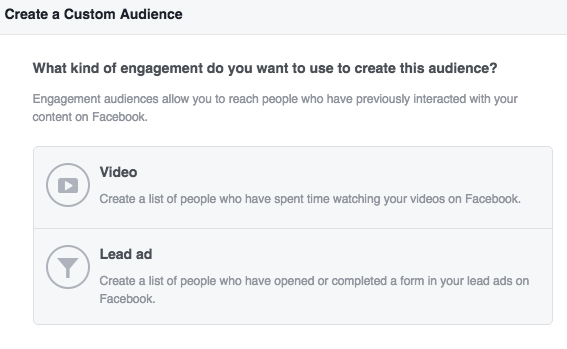 4.) Now a Window will Pop Up like the one below.

5.) You will select your Lead Form (for which particular Lead Form of yours you want to create audience)

Include your Audience Type

6.) The maximum duration of Lead Ad Engagement Audience is 90 days. 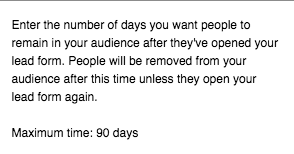 So Facebook Lead Ads Engagement is a great option for Advertisers who are using Lead Ads regularly.

Because Remarketing to any audience always produces better results.

However, Facebook Lead Ads in general has not been able to Win my trust so far

I have tried Facebook Lead Ads and I found the kind of Leads I am getting is not genuine.

Though I was getting cheap Leads but not very interested.

And you can make out the reason for it.
Since this audience has never visited my Landing Page, they were just shown a single Ad and the information was pre filled.

So they never deeply saw what I was offering.

And getting deep product information plus Visuals on your Landing Page are the things that creates impact on Visitors mind.

Since they never visited any Landing Page so it a very raw audience.

And many in my circle too reported of such less interested audience which they got through Lead Ads.

But, nothing should be disregarded.
And when it is Facebook’s Product then you cannot definitely disregard it.

I am sure there would be some Marketers who would be benefitting from Facebook Lead Ads for their particular niche.

And similarly, Facebook Lead Ads Engagement too is a whole new kind of Audience Remarketing.

And I will definitely try it once.

Because once you find a way/ niche for which you can make Lead Ads work for you then probably there is nothing better than this.

More comments on Facebook Lead Ads Engagement only after Testing.

Till then you can also try and let me know in Comments how did you find this update by Facebook.

20 Powerful Facebook Advertisement Targets that were probably unknown to you

Connect
Saurabh Bhatnagar
Internet Marketing is what I Love and I feel done only when I finish my Work. Favourite Pastime - Playing Cricket & Football.
Connect
Latest posts by Saurabh Bhatnagar (see all)
READ LATER - DOWNLOAD THIS POST AS PDF >> CLICK HERE <<